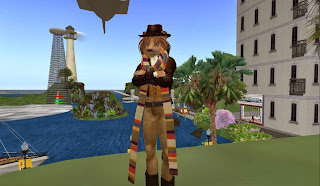 Sunweaver Bay's newest resident, Joshua Xavier, stands atop Sha Hill, surveying the many changes that have been added, since Becky Shamen first moved there, as one of it's first and longest residents. Like the Bay, Josh has evolved. His creation started as an experiment of Sha's, to prove that SL males could do as well as it's females, finding Love and Lindens Dollars. Like Sha, he is, alternately, human and furry. Having recently become his own man, with a seperate SL account, he will continue to share Sha's home and duties, as an explorer and writer for the Newser. While touring the Steampunk collective of Mieville, he found a shop called "Who's Who," on the Wells sim, and bought the multicolored scarf, worn by the fourth Doctor, Tom Baker. The making of this photo, to show off his new lion avi and outfit, served as the inspiration for writing about the evolution of Sunweaver Bay.
At one time, Sha had a castle on Sunweaver Air sim, connected to the West side of Sunweaver Space, within sight of Club Cutlass. After retiring from exotic dance and hearing rumors of the sim going away, she moved to low rent areas elsewhere, to cut down on expenses. With the creation of Sunweaver Bay, she returned to rent a lot and had her choice of locations. At that time, there was very little there, so she chose the hilltop at the west end of the bay, for it's panaroramic view. Then, as now, there were few neighbors, but the view has evolved considerably, to attract more renters.
Looking East from Sha's Place, we get a good sample of the scenic additions that have become a part of the sim, in the short time we have been a resident. On the right we see, at 11 floors and 88 meters tall, The Sunweaver Bay Apartments. Speaking of taking up lots of air space, check out H.M.A.S. Little Dove, which nearly cuts the sim in half, at the same altitude as the top of the apartments. Adding to the skyline, we see a Tesla tower and a lighthouse. At ground level, there are a variety of trees, bushes and flowers, and waterfalls in every direction. The bay now serves as a harbor for seagoing vessels, suggesting that this sim is the starting point for adventure. Now under construction, a monorail system will soon connect all the sims in Sunweaver Estates.
All of the improvements have indeed made Sunweaver Bay a very desireable place to live, but, for Sha and Josh, there was an unexpected draw back. Having a computer and router, which we are told is the minimum of what is needed for Second Life, made the sim too laggy for us. To resolve the conflict, without moving from her beloved home, Sha built a platform, 1000 meters above her lot and moved her house and furniture up, to enjoy lag-free living. 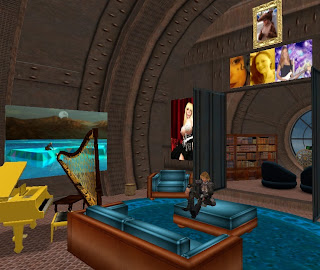 Alas, at that altitude, she no longer had the beautiful scenic view from her windows. To compensate for the loss, she surrounded the platform with walls, with mountain scenery texture. That improved the view, but, explorer that she is, it gave her claustrophobia. Meanwhile, Josh was shopping on Marketplace for a free airship to explore with and found a zeppelin skybox, that would fit Sha's lot, for a mere L$5. The new abode provided an unexpected plus. The external view was replaced with an interior, that even Captain Nemo would approve of. Upon seeing it, the fire chief pronounced it the coolest home he had ever seen in SL. What's more, the new arrangement used less of Sha's prim allowance. With the previous house, there were only 10 prims left. Now she has 30 in reserve.
Becky "Sha" Shamen
Posted by Bixyl Shuftan at 6:00 AM