LPP Neo: A Place of Floods and Mystery

This location seems to be a real paradox. On the one hand, it is one of the newest sims around, and yet it looks like a civilization, left in ruin by waves of rising sea levels. The Destination Guide gives only a brief description. 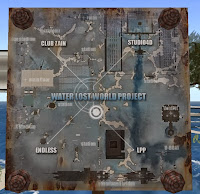 "From the fallen lighthouse to the marooned submarine and flooded railway, this house of steampunk style survives amidst a drowned region that is well worth exploring."

At first sight, our eyes tell us that almost all of the three connected sims are covered in water, leaving little else to be seen. Soon, our sixth sense begins to draw us in deeper. Perhaps the water is telling us that there is a great mystery to be found and solved, hidden from our eyes, just beneath the surface. We will need to focus our eyes and look for subtle clues.

A picture is worth a thousand words. This article has been richly illustrated, to assist your preparations in your quest for the truth. 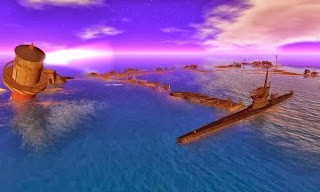 When given a map view, in Destination Guide, we see only the three sims of LPP, Studio4D and Club Zain. When we spot this local map, titled "Water Lost World Project", we have to ask where the lost sim is. Calling the phantom real estate "Endless" doesn't fit either. Endless implies always was, always will be. What premature pralaya has removed all but the idea of this, so called, Endless sim?


When we arrived, on a dock in LPP, there was a submarine moored before us. Before it could be examined, it sank beneath the water. Our original plan included using a boat or sub, to explore the area, but further research revealed this U-boat occupies the only channel, deep enough for a ship, and it is blocked at both ends and too narrow to turn around in. It is truly marooned, but still has some life left to it.
Near by, we find the remains of a fallen light house. It's beacon still shines and rotates, telling us to look around, to learn more of the story. The scene hints at how the land became covered by water. Only a fool would blame this on global warming. Melting ice caps would take years to cover the island with water and allow residents time to build higher. A tsunami could destroy buildings, but the ground water would all drain off in a day. If real life geology can be applied to SL, we must conclude that this sim has been the victim of an earthquake, which has lowered the land (subducted), perhaps by 10 meters, leaving only the hill tops. 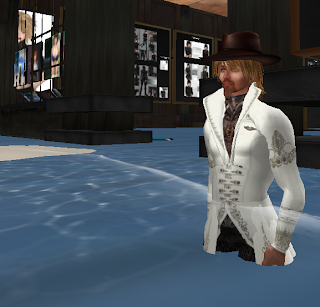 If you keep to the paths, between the sparse attractions on these sims, you'll keep your powder dry. Stray a bit and you'll wish you had worn hip boots or a wet suit. There are almost no shopping places here. The main shop has clothing for women and a black ops suit or two for men, but the prices are high, so even Sha would avoid going there. This shop, for Cyber Dolls, has some unique and well textured outfits. It's worth a look, even if you don't buy.

We head North from LPP, along the flooded railway, to Studio4D. The sim is almost entirely covered with a shop that sells dance animations. We tried a few, but at more than twice the price of most, quickly headed for the last sim in the group. The largest structure on the Club Zain sim is called the Main Floor and seems to be built, on stilts, to accomodate for the water. Inside, it's like a mix of dance club and TV studio. It reminds one of the sort of place where shows like "Soul Train" or "American Band Stand" would be recorded.
Just North of the Main Floor building, there is another postdiluvian structure, called the Stadium. It has a large dance floor, made of clear glass, flanked by enough bleacher seating to accomodate all the people that have visited this site, since it's beginning. Music is provided by a state of the art DJ booth, with a crate of vinyl albums and more CD titles than Walmarts stocks. In the center of the dance floor, there is a group of blue and green prims, which, at first seem to be a senseless clutter. As we pan our camera around, we begin to see that there is some planning involved in their placement.
A Puzzle 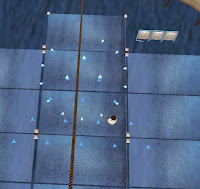 Moving the camera up, for a birds-eye view, we can see these prims have been arranged to form a symbol which is communicating some kind of message. The prims are placed on three levels, which we can study, in an attempt to decipher the symbol. At ground level, 15 blue triangles, all pointing the same direction, are arranged into a large triangle, broken up by progressively smaller ones, all pointed in the same direction. We don't know, yet, which of three directions our attention is being pointed in. About one meter above the floor, three green triangles sit above the blue ones on the floor. This way of "highlighting" tells us to look in the direction of the DJ booth. Higher still, we find 12 green bullets, arranged in a circle, all pointed to it's center. Had they been spaced equally around the circle, they might suggest a clock face or time. These bullets have left a gap from 10:30 to 12:00, which could mean either the time has not arrived or has been cut short. We are being given a message about this DJ, or perhaps DJs in general. Either their time has yet to come or it has been cut short. We will need more clues, to get the whole story. 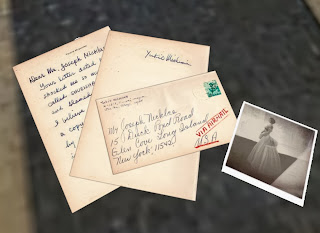 The thing is, everywhere you go, there are odd things, found strewn about, that could be another clue. In writing this article, we returned many times to see things that we had passed before, thinking them odd but unimportant, but now that the puzzle was being pieced together, they began to fit and fill in more detail. The return visits also turned up new things that hadn't been seen before. In SL, when you click on a door, it opens. We found two doors, one on the ground and the other on the base of the abandoned bridge. They should not have opened to anything, but when clicked gave the message that we were not allowed to enter. Knowing that there were no others on the sims, we used the cam to pan around to the backside of the doors and find a chair or pose ball to sit on and poof, we were inside forbidden areas and finding more clues. At the base of the bridge, this technique got us into the "Stray Sheep Diner". This is one of the most developed spots yet. It is very detailed and full of possible clues. It is difficult to understand why the doors are locked. We can only hope that entering doesn't get us banned.
We could tell you much more about this adventure, but our goal is to tempt readers into having adventures of their own. Test your Sherlock Holmes skills and solve the mystery of TPP neo.