In recent months, the Newser has had some great articles on Steampunk communities, like Caledon and Steelhead. Reviewing the Destination Guide, Josh discovered a collection of other Steampunk communities, ranging in size from two to thirteen sims. Names and addresses were gathered into a notecard and he began exploring each of them. 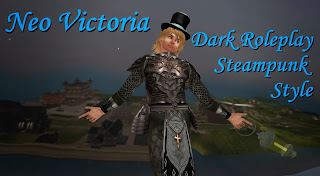 After touring the first four, beleaguered by lag and yearning to yawn, it began to look like his report would be titled "adventures in adversity." While it was true, he had noted a point or two of interest at each location, there are only so many ways to say, it was beautifully, ornately textured, but beyond my meager budget to buy. Such a list would not be something he, or Sha, would be willing to sign their name to.

Thank gods and faes, our next stop proved to be an adventure, worthy of a story of it's own. Landing in Neo Victoria, we find ourselves in the visitors center, where me must prepare for what lies below.

By it's own definition, Neo Victoria is, "Dark roleplay, Steampunk style - A small community of gifted artists, working together to bring their stories out of Second Life, into the world of the real."
Avatars of all types and species are permitted, as long as they are not "cartooney." An anthro coyote is OK, Wile E. Coyote is not. 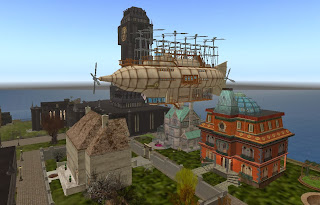 Orientation and shopping is in the sky. The two, ground level sims serve as home for members and a film lot for Machinima videos. If you are not a member, or out of character, you can visit ground level, but must get and wear the OOC (out of character) tag. To engage in roleplay, one must conform to the local story line. No cross story lines are allowed. As a means of learning the lifestyle, notecards are given as you walk down the dark halls that lead to the TP to ground level. Alternatively, there is a web site, giving more details and samples of their videos at www.NeoVictoria.net . They also have a web site for members only, which has community news and personal pages for each member.

Other factors that made Neo Victoria a great place to explore were, no doubt, the bi-product of using the sims for making videos. There are fewer mesh scenery objects, making it almost lag free. They also allow you to rez things there, with auto-return after 15 minutes. Using this, I rezzed my airship, for a birds eye view and saw the entire place, in far greater detail than was possible at other places visited.

Becky Shamen
Posted by Bixyl Shuftan at 6:00 AM